This is probably going to be the first “long-ish form” post I’ve put here, and the first post on any blog for a while. Before we dig in, some background:

I’ve gone a little bit into X-Wing (which came out before the other two), but haven’t spent time with Legion (the newest of the three). I’ve got the Middle Earth mini game to sink my money on, thank you.

Shortly after Atomic Mass Games took over the Star Wars franchise games, they announced that they had nothing in the works for Star Wars Armada for at least the next year and a half, and they’ll revisit it then. It… didn’t go over well with players, and has gone a long way towards damaging the game.

This is where my hobby for 3D printing comes in. I started printing minis for an ongoing D&D campaign, which then escalated into Lord of the Rings miniatures, and now has invaded Armada. Printing my own ships and squadrons? Limited only by the resin I can buy on Amazon? We’re in trouble heaven.

Finding good models was the difficult part. Eventually, I came across a designer who publishes his from-scratch 3D models under Onil Creations (Thingiverse Link). I then found his Patreon, which is where I hit the gold mine. I highly recommend supporting him if you want to print some neat Star Wars ships.

ANYWAY. I’m on a personal printing hiatus while I get through all of the paint backlog. However, in his Discord I got to see some really beautiful paint jobs as part of a painting contest. Being a volunteer moderator, as the prize I offered to create ship cards in the style of Star Wars Armada cards. These cards could be printed at home (or through a professional printer) and played in friendly games. A few examples are below.

I have to say… It was pretty fun. While the artwork at the top could use some improvement (my main computer with all of the graphics software is old and tired), the potential for new Armada ships is exciting. After designing some cards and getting really into the weeds on Star Wars lore and figuring out game stats, I decided I might as well publish something about the stupid amount of work that went into them.

Like many games before it, the players will have to come together and save this game, too. The best example is NISEI, a non-profit fan-created set of expansions for Android: Netrunner, a great card game if you ever get into it. If Netrunner fans can create something, then Star Wars fans can almost certainly create it too – after all, if we’re still around after the last trilogy, we must be dedicated.

This post is more or less my letter of intent. Other posts will be published soon that showcase some of the work so far. I would love for any Armada players to comment on the threads with their input. If we get enough activity around the idea then we can make it more formal and all become great game developers one day.

Since I don’t have a post ready as of publication (but they are on the way), you can check out some 3D printed ships for my custom Star Wars: Armada task force – The Hapan Fleet. No stats yet, but we’ll get there. 🙂 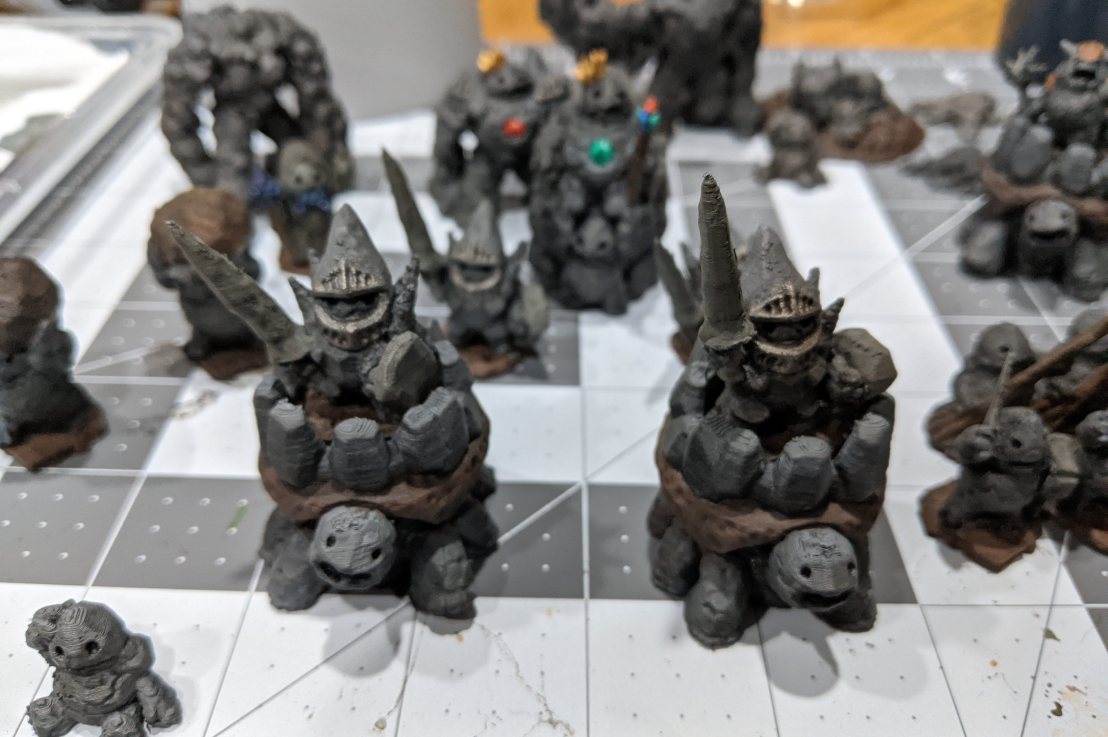 Long posts suck – it’s like looking for a cooking recipe and having to get through the author’s whole life story before seeing the ingredients list. With that in mind I’ll keep this post short.

I own a few 3D printers, and love them oh so much. One benefit is I get to print little minis, and below I’ll share a quirky set that I printed, painted, and am looking for a chance to use them in something, maybe as my own little version of Ewoks in a D&D campaign.

I didn’t create the models, though 3D modeling is something I’d like to get into. All of these were printed with my heavily modified workhorse, an Ender 3. You can see layer lines from this printer which is mostly inevitable unless I wanted to sand all of the little nooks and crannies (I didn’t).

All of the paint is the cheap kind you can find at Target or Walmart, with the exception of three Games Workshop paints you can see for the gemstones. Those technical paints are just really fun to use, and certainly help things stand out.